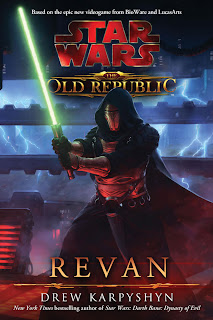 Why? Just fucking why?
We didn’t need this novel, we could have quite happily left the games alone, but then someone has to write this horrible mistake. Couldn’t they have at least given it to an author who doesn’t apparently hate Knights of the Old Republic fans?

The overall plot of Revan is covering the mysterious years after Knights of the Old Republic, why he went missing and where the Exile is. This didn’t need to be expanded upon. Part of what made his leaving so interesting was due to the brief hints as to why, giving suggestions to why he was leaving but never outright saying it. It was a mystery, and mysteries are only interesting so long as you don’t know the truth behind them. But the book has bigger issues than just existing, much bigger ones.

The flaw which stands out the most amongst its shortcomings is its characterisation. Drew Kerpyshyn is a competent author, one who can produce genuinely interesting things onto paper like the Darth Bane series, but he seems not to understand any characters he doesn’t personally create. Or apparently hates them. As a result in this novel Knights of the  2 is made almost entirely irrelevant and is completely swept to one side. Most of it is retconned into oblivion.

According to this novel the Exile is just an every day Jedi sent after Revan by Bastila, not a wound in the Force itself. Thus KOTOR2 apparently never existed and its events never happened due to the removal of this one key characteristic. It was the entire driving force behind Kreia going after the Exile so that never happened; Nihilus, another wound in the Force, just plane never existed in the first place according to this. Visas Marr is also deleted from existance. This was a retcon which didn’t need to be done. The Exile was a good character, didn’t need to be nerfed like this and one of Bioware’s best RPGs deserved a better send off than the bastardisation which is this novel. But wait, it gets worse.
Why did they get rid of the Exile’s unique trait? Apparently to give the same ability to a completely new character. That’s right the villain in this, the bloody Sith Emperor, is a wound in the Force. What, was it too inconvenient for there to be a third person who had this ability? Did Kerpyshyn just look at the idea and think “MINE!”?

It’s not just the KOTOR2 characters who suffer in this either. Revan staggers aimlessly about the plot like he’s concussed. Okay, he’s supposed to have memories coming back but that doesn’t mean the writer had to turn him into some halfwit who goes off to fight the Sith without the absolute vaguest fucking clue about what he’s doing.
Oh, and also all of his actions are reduced to a petty slave acting out of spiteful hatred towards his mind controlling master rather than someone actually working for any greater good. No, that is actually in there and it's even worse than it sounds.


There are some well written characters. The Emperor does have some interesting elements,  and a Sith known as Scourge is a very good character. The problem is all this is constantly overshadowed by Kerpyshyn apparently putting no where near the effort needed for a novel like this. But wait, it gets worse. Here’s how the novel concludes:


The Exile rescues Revan, teams up with Scourge and they go off to take on the Emperor. The Emperor proceeded to beat Revan senseless, burning him horrifically as they go one on one until the Exile intervenes and they prepare to team up. At which point Scourge’s chronic backstabbing disorder gets the better of him and he insta-kills the Exile. Revan is taken captive and turned into the Emperor’s bitch. Kept alive as a source of power and knowledge for Bioware’s new big bad villain.


Do you know what the absolute worst part of this is though? The crowning turd in the waterpipe? In one of Kerpyshyn’s blogs he complains about people disliking the book and states they just have to deal with it. Since Revan is a financial success apparently he basically doesn’t care, I quote "I guess controversy sells!"


When Revan is good it is admittedly very good, but its massive flaws, spiteful attitude towards KOTOR2 and rife use of deus ex machina drag it down.


Save yourself a lot of time, pain and money this year give this one a miss. If you have any love for Star Wars, KOTOR or Bioware do not buy this book and hope to high heaven it is retconned from the canon.

The : Revan and all related characters and media are owned by Bioware and was published by Del Ray.
Posted by Bellarius at 23:59